The pandemic-imposed restrictions have prompted Malayalis to turn to their backyards for a creative pookkalam this year.

Made with PPE scrap

Over the past three decades, the season has come to be marked by flowers from neighbouring States. As Pookkalam competitions became the norm, offices and institutions bought flowers in bulk. Even the humble home pookkalams began to be filled with oleanders, asters, marigolds and bachelor’s buttons that came from Tamil Nadu and Bangalore.

However, there was a time when the wild flowers that carpeted waysides and hills were the harbinger of Onam in Kerala. Poet-lyricist Jayageetha reminisces her childhood in Kollam: “Dew drops glistened on the flowers as we plucked them from branches or picked them from earth still wet from the rain. The pookkalam had to be made before we rushed to school. So gathering the flowers was done as soon as it was daybreak,” she recalls.

Back to the basics

This year, it is a chance to go back to the basics, says businessman Balram Menon, who discovered a variety of wild flowers on his cycling track in Kanjiramattom, Kochi. Along with his seven-year-old son Ram, he started plucking them. “We feel it is safer to make use of the local flowers for the pookkalam this time,” says Balram.

Parvathy Vinod from Thiruvananthapuram too will have a completely local floral carpet this year. “My cousins and sisters live close by and so my kids will gather the flowers from everyone’s garden,” she says.

The flower markets therefore wear a gloomy air. An average shop in Chala in Thiruvananthapuram, one of the biggest domestic markets for flowers in Kerala, sold flowers worth ₹6 to ₹7 lakh last year. During the 10 days of Onam, sales went up from 25 kg to nearly 200-250 kg on the penultimate day of Onam.

“This year, we have ordered lesser quantities of flowers. With social distancing in force and all festivities cancelled, the demand for flowers is bound to be much less,” says Sashidharan Nair, secretary of the Flower Merchants’ Association in Chala.

Flowers at Chala usually arrive from Thovalai, Dindigul, Rayakottai and Madurai in Tamil Nadu; Hosur and Bengaluru in Karnataka.

“Corporate and educational institutions have migrated to digital pookkalam contests,” says Surendran KG of Gopi’s Flower Mart in Paravur. “So, there is very little expectation,” he adds.

Business has reduced to 20% of the usual, says Radhakrishnan, owner of Atham Flowers, a flower shop at Patturaikkal, Thrissur. The only flowers that are being sold, though few in number, are marigold and bur flower, he adds, as they are used to make garlands. The pandemic has not affected the cost of the flowers, a kilo of marigold costs Rs 60, says another flower seller in Thrissur. 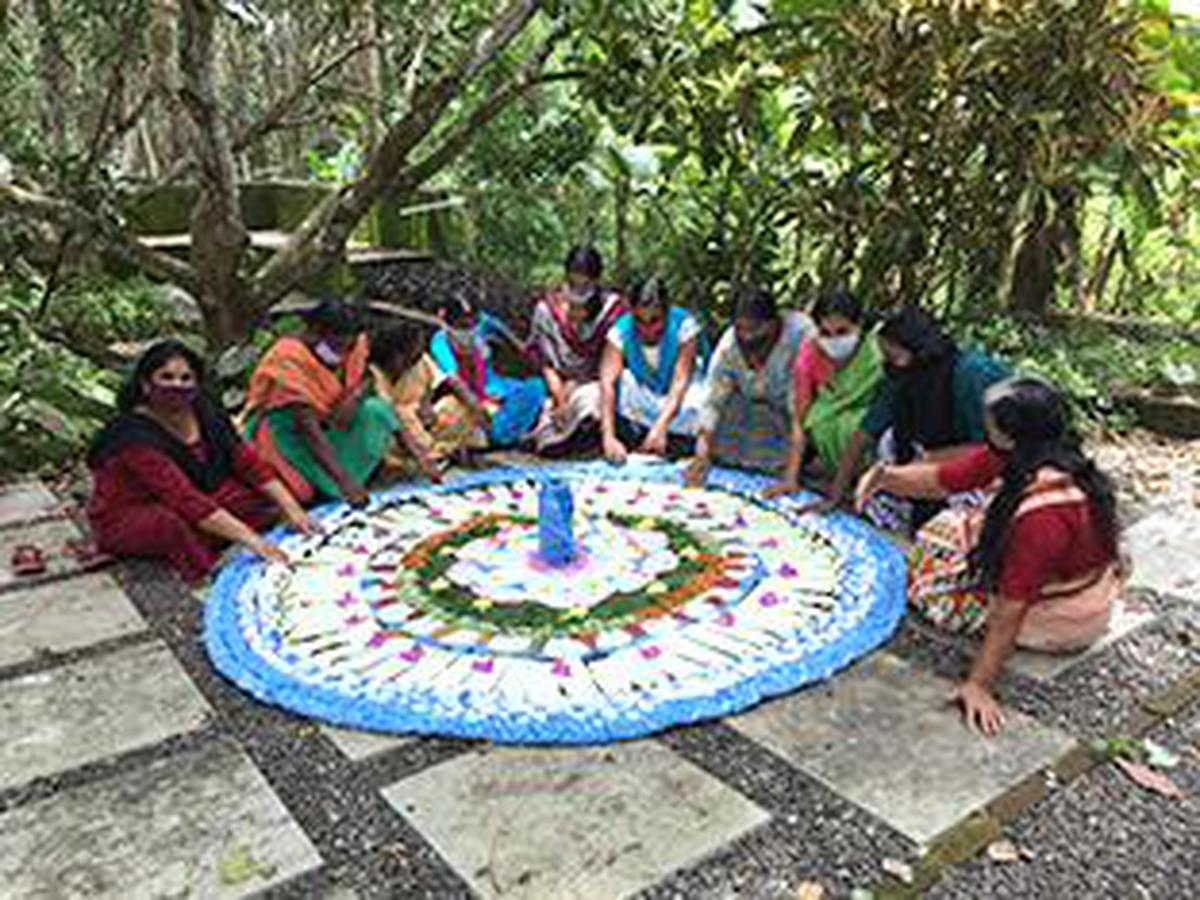 Pookkalam made with PPE scrap

The month of Chingam is also a time for weddings. “With COVID-19 protocols in place, we have got very few orders,” says N S Prakash, who has been running a flower stall in Ernakulam for the past 27 years. “With most centres of worship still closed to devotees, business has come crashing down for vendors like me,” he says.

In pre-COVID times, he sold 5,000 lotus flowers a day. Now, the sale has come down to 100 flowers a day. While the lotuses came from Nagercoil in ten sacks, containing 500 flowers each, every day, the ixora and tulsi came from Tiruchi and Madurai. “Now, since the demand has dropped, I don’t get the flowers,” says Prakash.

The flower industry has been struggling since the 2018 flood, says Joy Alexander, managing director of Flower Depot on TD Road, Kochi, which has been in the business for the past 35 years. “The pandemic has just sounded the death knell for an already ailing industry. Kerala had a market for ₹5 crore, which has now come down to a ₹5 lakh,” he says.

For those who grew up in the seventies and eighties, however, this is how their Onams were. Flowers were sourced from household gardens or the commons in villages. 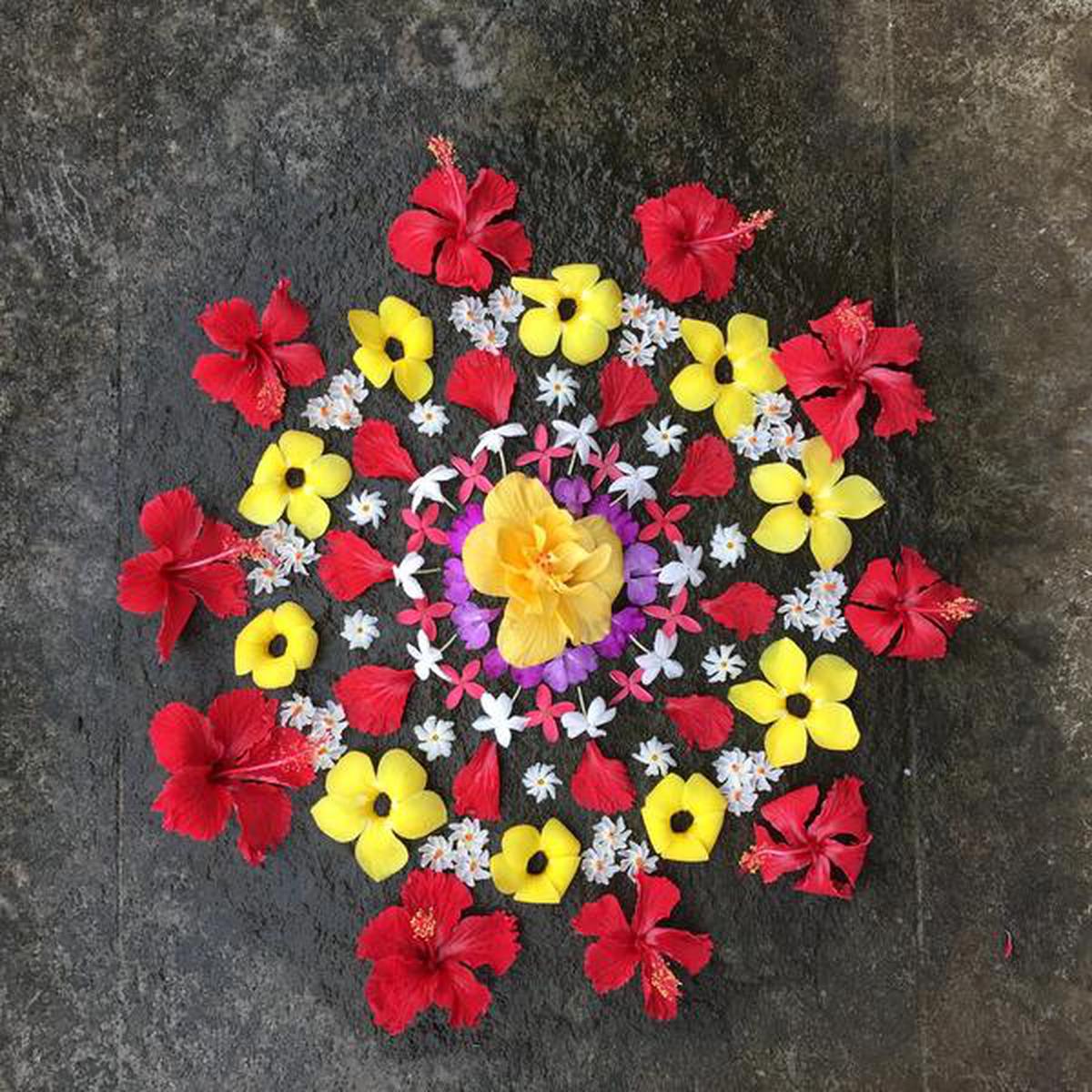 “Buying flowers was unheard of in those days,” says blogger Manjusha Pisharody, a resident of Mumbai who hails from Palakkad. She adds, “It did not really matter where you picked them from. Since the harvest would be over by the time of Onam, fields and waysides would be covered with small blooms.”