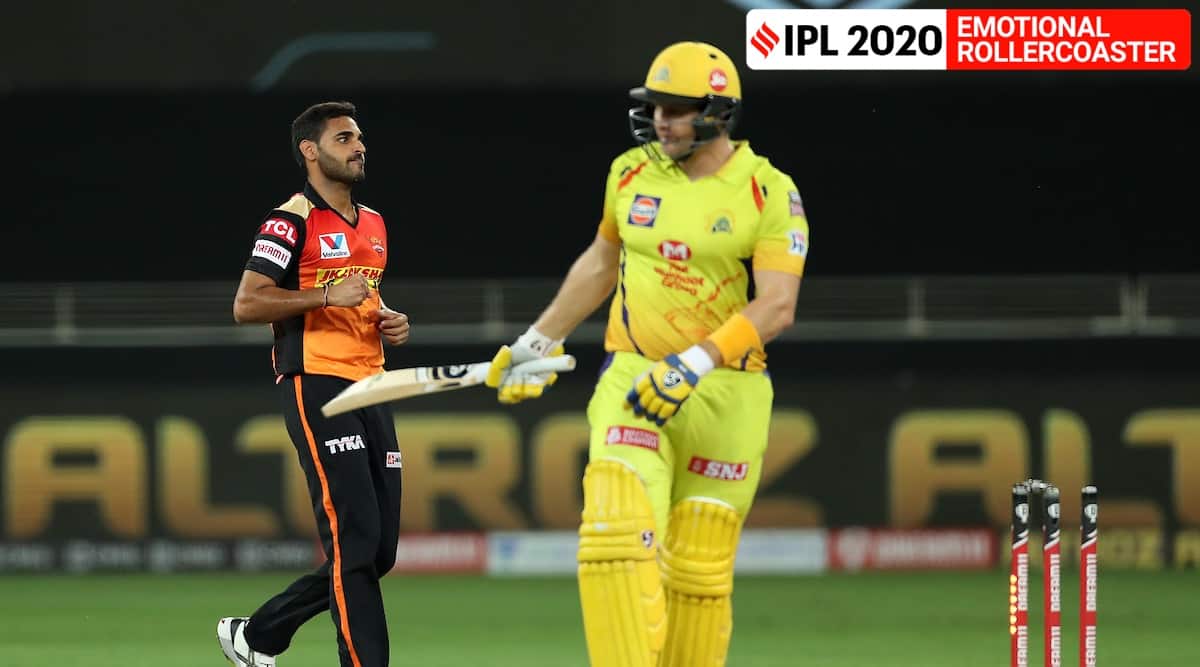 For some years now, Watson’s problem has been the inswinger that threatens the front leg that he tends to plant across. From his first delivery, Bhuvneshwar Kumar started to induce claustrophobia with a series of inswingers. The first four produced three stifled lbw shouts. Not that Watson doesn’t know his problem. In fact, before the tournament he said he wasn’t going to worry about that lbw threat, not fuss about his front-foot stride across but instead would hum a song, literally, and play it as if there was no problem. Not sure if he was singing but Kumar was certainly making the ball talk. He kept bending them back in, and then came the wicket ball. It curved in but from a tad wide outside off and a touch short in length. That width and length made Watson try for the break-free cut shot but it went awry: the feet, the head, the bat-face, the nipbacker, and the rushed-waft meant he chopped it on to his stumps. The sound of leather on wood made Watson sing out a dirge: a cry of anguish as he wafted his bat over the stumps in frustration before he trudged back.

Iceman cracks
Of all the places, Kane Williamson finally decided to lose his cool in an IPL game. Glaring at a 19-year-old, the baby of the Hyderabad side, isn’t what cricketing yogis do. Mr Nice is expected to be Mr Nice always. Williamson flicked the ball from leggie Piyush Chawla to the mid-wicket region and took off. Garg was caught ball-watching stead of scampering. Snapping out of his reverie, it was too late. A tough run anyway, his non-response and poorly judged non-single to the quick prompt, saw Williamson Hulk out in a rare lippy reply. The stare from the Kiwi would have unsettled any rookie. But not Garg. He made an unflustered unbeaten 51 off just 26. Next time you are under the pump Kane, use your feet and loft the ball to the boundary. You won’t have to run or stare.

Deepak Chahar’s designated four overs encompassed four emotions. The 28-year-old reached the high of rattling Jonny Bairstow’s bearings in just the fourth ball of his first over – pumping his fists, knowing that the ball was swinging and it was set to be his night. But fortunes swung too. In particular, start of the 17th over. Jadeja and his reliable pair of hands were supposed to deliver Chahar’s second, but he got gifted horror as Jadeja spilled that. The next ball, Shardul Thakur dropped another regulation, in a moment of mangled madness. The TV cameras panned from Chahar’s incredulity to a dead-pan MS Dhoni, taking it all in. Just when all the fight had left the CSK bowler’s body, his captain came to the rescue, holding on to what could no longer be called an easy catch, created from the last ball of the 17th over.