‘Maveli naadu vanidum kaalam…..’, the popular Onappattu that celebrates the spirit of Onam, harks backs to an egalitarian past when the land was ruled by a just ruler, King Mahabali. Different versions of the song have been sung in different ways but the déjà vu it evokes remains the same, whether it be sung by veteran playback singers or the latest music bands in Kerala.

In cinema, music, dance and art, this song has been interpreted by many artistes and each has captured the intrinsic feel of a harvest festival that resonates with the ethos of the people of the State.

James Thakara, frontman of music band Thakara, imbued the lyrics with a colloquial charm with his band’s rendering of the lyrics. Says James: “Every time we sing this number, it never fails to strike a rapport. There is an innate music in the lyrics that holds up the idea of an ideal State that we are all striving to achieve.”

A sentiment that is shared by Varun Sunil, founder of music band Masala Coffee. He says though he is based in Mumbai, as soon as the verses are hummed or sung, even non-Malayalis get the general feel of the song that is soaked in the vibe of Onam. The song was also heard in the film Mahabali (1983), when P Madhuri sang the popular verse under the baton of MK Arjunan. 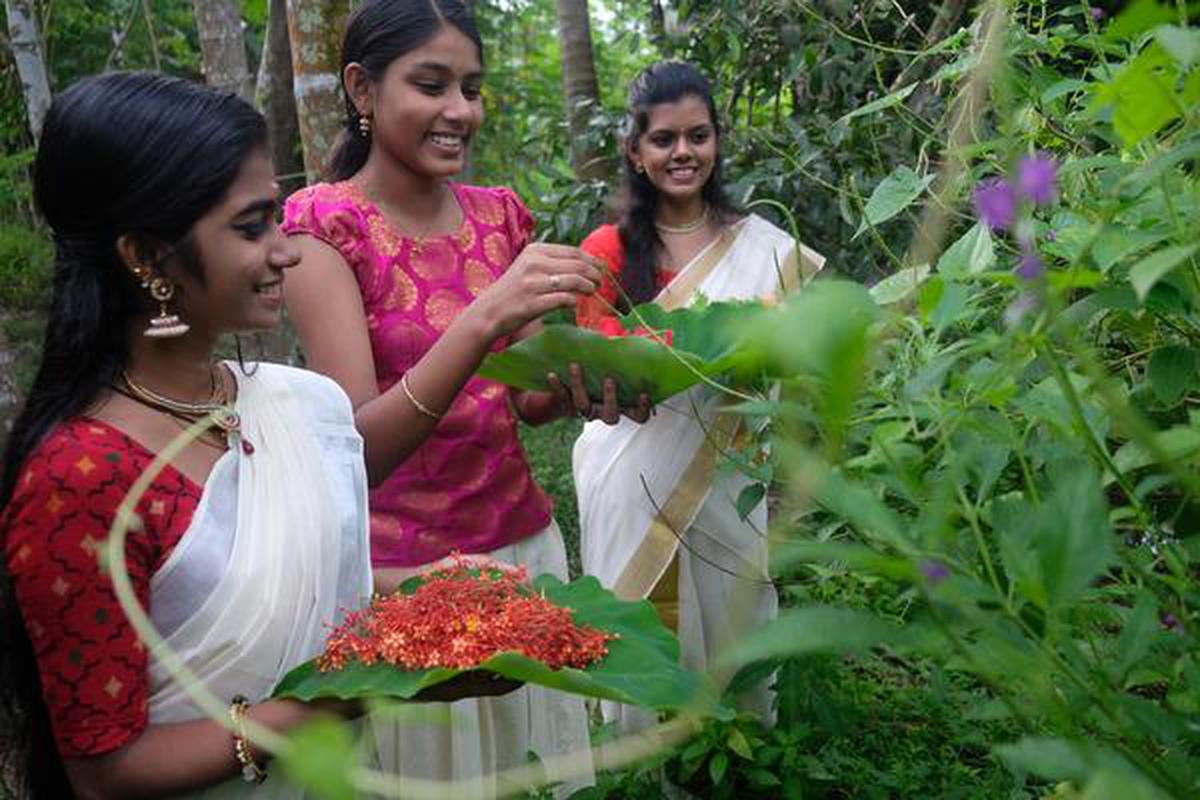 However, the name of the poet who penned these lyrical lines is mired in debates and discussions. While a section of scholars of Malayalam attributes these verses to Sahodaran Ayyappan, a disciple of Sree Narayana Guru, there are others who feel that the lyrics are older than that.

Poet and academic V Madhusoodanan Nair says the verses are likely to have been composed in the mid-17th or early 18th century by the then ruler of Thrikkakara. “As it happens with many old verses and songs, over the years, the lines may have been changed and interpreted by regional bards,” he says.

Music critic TP Sasthamangalam points out how songs have always been an intrinsic part of the Onam celebrations by way of the folk dance of Thumbithullal, the robust beats of the songs during the regatta in Aranmula and the rustic numbers that must have been sung by children gathering flowers for the floral carpets made in homes.

Poet-lyricist Prabha Varma recalls an upbeat song sung by oarsmen of the Aranmula Vallamkali, a ritualistic, annual boat race that is held every year in honour of the deity at the Sree Parthasarathy temple in Aranmula.

“The majestic chundanvallams would race ahead in the waters while the oarsmen keep up the momentum with folk songs known as vanchi paattu that have been adapted by several songsters. But my favourite is the song that goes ‘Aranmula Bhagavante ponnu kettiya chundanvallam, attilitta thannu pokum, thottilitta thottu pokum, paadathittal pakshipole parannu pokum’. For all those who grew up on the banks of the Pampa, Onam is the season of flowers, feasts, music and boat races,” he says.

So Kerala is on song during Onam. In the eighties, were composed specifically for this season, numbers that have become a part of the collective consciousness of Kerala. Latter-day poets and lyricists have also celebrated the festival in verse and many of those capture the myriad ways the festival is celebrated all across Kerala.

Tharangini, a recording studio set up in Thiruvananthapuram by eminent playback singer KJ Yesudas, was perhaps the first to release a set of songs every year for Onam. “The first album that came under the label ‘Onappattu’ was released in 1981. It had songs, written by ONV Kurup and composed by Alleppey Ranganath, all sung by Yesudas himself. It was an Onam gift from the maestro,” says TP.

One of the evergreen albums from Tharangini was ‘Ulsava Gaanangal Vol.1’, which had Sreekumaran Thampi writing the lines for Ravindran Master’s music and sung by Yesudas. ‘Uthradappoonilave vaa’, ‘Ennum chirikkunna Sooryante…’, ‘Paayippattattil vallam Kali…’ and ‘Oru nullu kaakkapoo…’ were immortal songs in this collection.

Every year, this album of Onam songs, written and composed by great lyricists and music directors, was much awaited by music lovers. In 1986, ‘Aavanippookkal’ was a record-breaking album that had lyricist Yusufali Kechery teaming up with composer MS Viswanathan, adds the critic.

In that category of songs is ‘Thuyilunaroo, thuyilunaroo’ in a long-playing record released by HMV, which had lyrics written by Sreekumaran Thampi and music by veteran V Dakshinamoorthy. Sung by Yesudas, the song is on the top of singer-composer Sithara Krishnakumar’s list of favourite Onam-based songs. Although, it was not a festival-based collection, it continues to reign supreme as a quintessential Onam song.

Malayalam films have popularised several numbers that have become the staple for Onam programmes. One such song chosen by bass guitarist Ashok Betty Nelson (Thaikkudam Bridge) and vocalist-songwriter Gowry Lekshmi is ‘Onappaattin’ in the film Quotation, directed by Vinod Vijayan. Composed by Sabish George, the song’s visuals are a delightful mélange of vignettes of Onam. ‘Thiruvavani Raavu’ in Jacobinte Swargarajyam is the most recent addition to the list of Onam songs that became chart-busters. There are several such songs that resonate with the festivities.

The appeal of certain olden goldies like ‘Poovili poovili’ and ‘Onappoove’ is universal. Both the songs are sung by Yesudas and tuned by Salil Chowdhury. The lyrics of ‘Poovili’ is by Sreekumaran Thampi while ‘Onapoove’ by ONV.

The pandemic might have muffled the celebratory songs of Onam, quite a bit this year, but come the festival, these evergreen songs resonate in every heart.