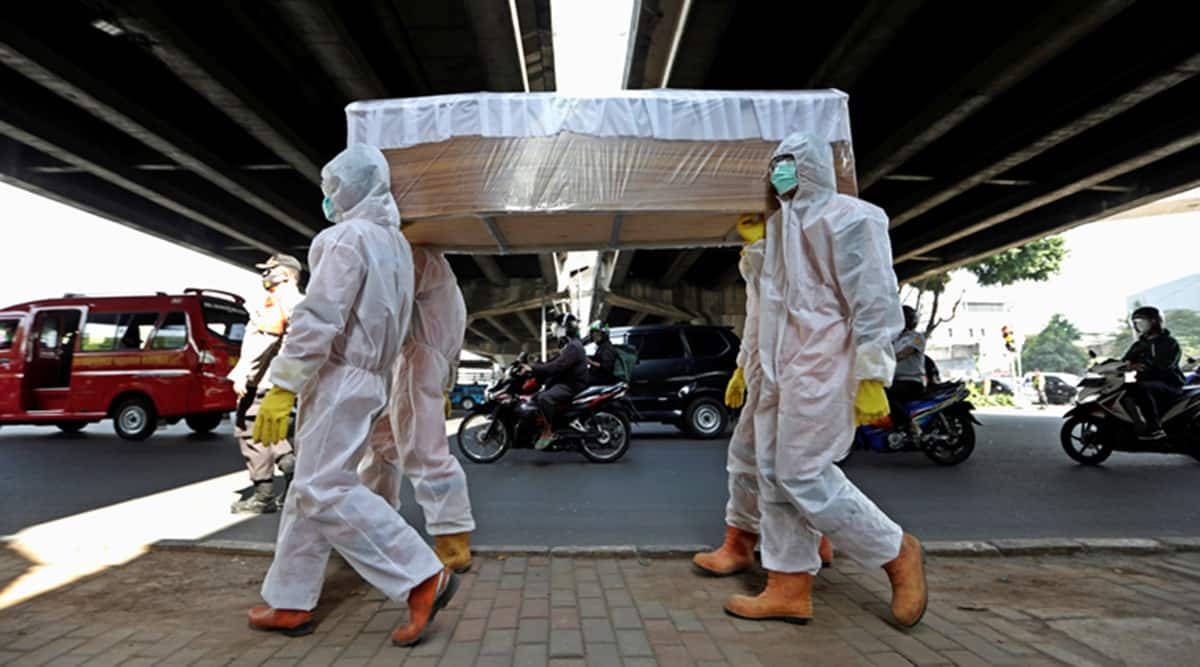 Government workers wearing protective suits carry a mock-up of a coffin of a coronavirus disease victim on the sidewalk of a main road to warn people about the dangers of the disease as the outbreak continues in Jakarta, Indonesia, August 28, 2020. (Reuters)

Each day in Jakarta at 9 a.m. sharp, local government official Ricky Mulyana and three colleagues don full personal protective equipment, hoist a wooden coffin onto their shoulders and set out on a ‘funeral’ procession down busy city streets.

The coffin, wrapped in plastic, contains only an effigy. But as Indonesia struggles to contain a surge in coronavirus cases, authorities are trying shock tactics to catch the public’s attention and drive home crucial health messages in a country that has the highest virus death toll in Southeast Asia.

“It’s a tiring job because people don’t understand the danger of the COVID-19 disease,” said Mulyana during a coffin procession along a street in Jakarta’s southern Cilandak area, a sprawling suburb with business centres and both the middle class and poorer districts.

Nearby, other officials held up placards and used loudhailers to urge residents to follow health protocols, including wearing masks and social distancing.

The alarming stunt is one of a string deployed amid desperate case numbers: Indonesia on Thursday recorded a record daily spike in coronavirus infections and now has more than 180,000 cases and at least 7,750 deaths. Jakarta has been the epicentre of Indonesia’s outbreak, accounting for nearly a quarter of cases in the world’s fourth most populous country. Government workers wearing protective suits carry a mock-up of a coffin of a coronavirus disease (COVID-19) victim on a main road to warn people about the dangers of the disease as the outbreak continues in Jakarta, Indonesia, August 28, 2020. (Reuters)

Elsewhere, tactics used to draw awareness to the virus have even included deploying a cast of “ghosts” to patrol streets of a village in Java, hoping an age-old superstition will keep people indoors.

“Until now people are still not aware that using a mask is very important,” said Mulyana. He said he hoped seeing a coffin would make people realise the danger of the disease.

Some residents watching on said the coffin parade could help get the message across. 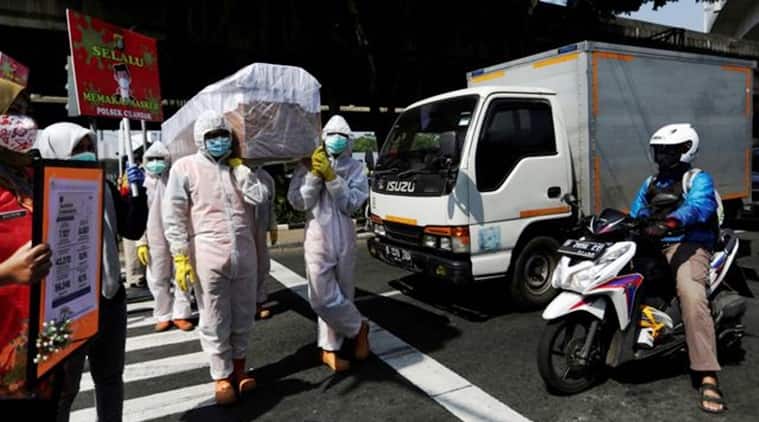 The alarming stunt is one of a string deployed amid desperate case numbers. (Reuters)

“Now, people can understand (the consequence). Without this (initiative) people will always break the rules,” said Masno, 74, who uses one name.

The daily procession started last week and is expected to run for two weeks until Sept. 10.

“We hope it will frighten the public and increase their awareness, and that residents in Jakarta will be receptive,” said Encu Suhani, deputy chief of Cilandak’s local government.