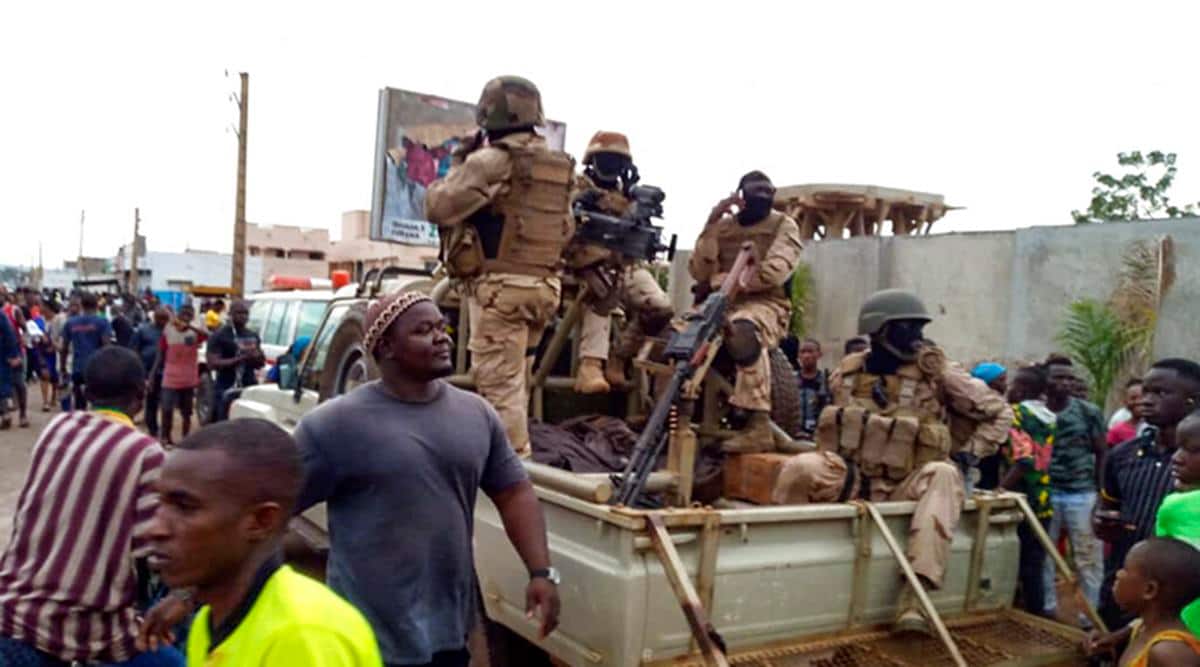 Malian troops and citizens gather outside the private residence of Mali’s President Ibrahim Boubacar Keita in Bamako, Mali Tuesday, Aug. 18, 2020. Mutinous soldiers surrounded the private residence of Keita on Tuesday, firing shots into the air and a West African regional official confirmed that the president and prime minister had been detained, following several months of demonstrations calling for his resignation. (AP Photo)

The military leaders, who overthrew and arrested the President of the West African nation of Mali in a recent coup d’état, have vowed to restore stability in the country and to conduct fresh elections within a “reasonable” period of time.

The soldiers, seated behind a wooden table in a televised announcement aired early on Wednesday morning, claimed that they were “not interested in power but in the health of the nation”, the Guardian reported. They had merely intervened due to an intensifying political crisis that had left the country in a state of “chaos, insecurity and anarchy”, they said.

Their announcement came hours after Mali’s President Ibrahim Boubacar Keita publicly announced his resignation and the dissolution of the parliament on state television late on Tuesday. Keita’s arrest and resignation followed weeks of mass protests against his government following a highly-disputed election, rampant corruption and years of violent Islamist insurgency, the New York Times reported. Mali crisis: Speaking on national broadcaster ORTM TV, Colonel-Major Ismael Wague, centre, spokesman for the soldiers identifying themselves as National Committee for the Salvation of the People, announce that they have assumed control of Mali, Wednesday Aug. 19, 2020, and vow to instal real democracy and security of the people. (ORTM TV via AP)

The mutiny in Mali began on Tuesday morning at the Kati military base, where the president as well as the country’s Prime Minister Boubou Cisse were ultimately brought after being detained. Witnesses saw armoured tanks and military vehicles driving down the streets of Kati, according to an AP report.

The country has been in a state of turmoil since 2012, when a coup took place in response to a violent uprising of North Mali rebels, called the ‘Tuareg uprising’, which was hijacked by fighters linked to the al-Qaeda, Al Jazeera reported. In an election that took place the next year, Keita won in a landslide victory and was later re-elected for a second five-year term in 2018.

Here are the top developments from Mali

‘Do I have a choice?’ President Keita asks as he announces his resignation 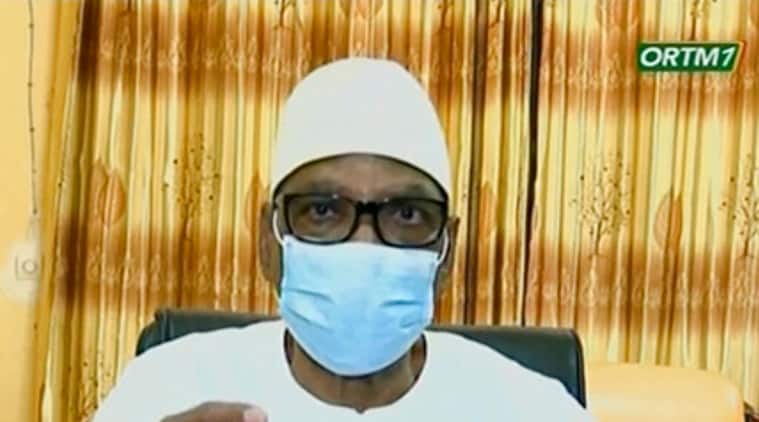 Wearing a blue surgical mask, Mali’s 75-year-old President Ibrahim Boubacar Keita announced his immediate resignation on national broadcaster ORTM last night, hours after he was detained by a group of armed soldiers and brought to the Kati military base, CNN reported.

“For seven years I have with great joy and happiness tried to put this country back on its feet,” Mali’s 75-year-old President said, his face barely visible behind a blue surgical mask. “If today some people from the armed forces have decided to end it by their intervention, do I have a choice? I should submit to it because I don’t want any blood to be shed.”

Earlier on Tuesday, in a post shared on Facebook, Prime Minister Boubou Cisse urged militaries to engage in dialogue with the government. “The government calls for reason and a patriotic sense and asks for the use of arms to be stopped. There are no problems that cannot be solved in dialogue,” he wrote.

‘Join us to restore Mali to its former greatness,’ soldiers say Mali crisis: Security forces ride in a truck in the capital Bamako, Mali Wednesday, Aug. 19, 2020. The Malian soldiers who forced President Ibrahim Boubacar Keita to resign in a coup promised early Wednesday to organize new elections after their takeover was swiftly condemned by the international community. (AP Photo/Baba Ahmed)

A statement released by the military leaders behind the coup — who are calling themselves the National Committee for the Salvation of the People — was beamed on TV screens across the country on Wednesday. They vowed to restore stability in the country and to pave the way for fair elections in reasonable time, BBC reported.

“We are not holding on to power but we are holding on to the stability of the country,” said Ismail Wague, Mali Air Force’s deputy chief of staff.

“With you, standing as one, we can restore this country to its former greatness,” he added. Wague also announced that the country’s borders would be closed and a curfew would be imposed for a while. 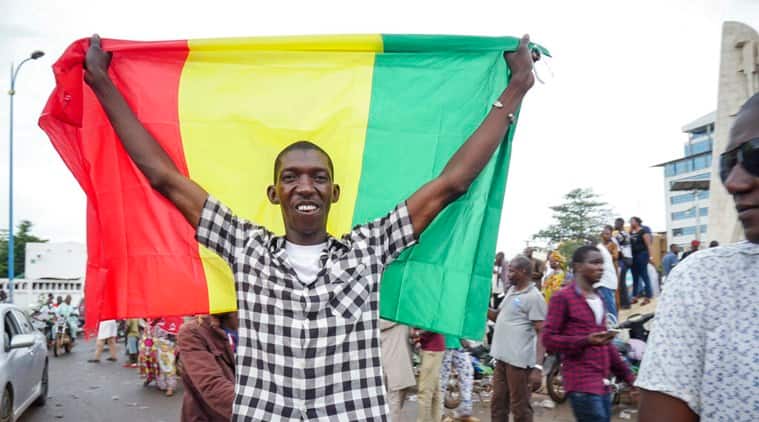 Mali crisis: A man holds a national flag as he celebrates with others in the streets in the capital Bamako, Mali Tuesday, Aug. 18, 2020. Mutinous soldiers detained Mali’s president and prime minister Tuesday after surrounding a residence and firing into the air in an apparent coup attempt after several months of demonstrations calling for President Ibrahim Boubacar Keita’s ouster. (AP Photo)

Huge crowds of anti-government protesters took to the streets once again to celebrate the arrest of the country’s President and Prime Minister by the military.

Protests broke out in the city last month, when the country’s constitutional court overturned the result of the general election that took place in March and April, when Keita’s party did not perform well, the Guardian reported.

The Keita-led government launched a violent crackdown on protestors, which resulted in the death of at least 14 demonstrators and bystanders, as per reports. The Chairperson of the African Union Cyril Ramaphosa condemned the mutiny in Mali and demanded the release of the country’s President, Prime Minister and other government executives, AFP reported.

“President Ramaphosa calls for an immediate return to civilian rule and for the military to return to their barracks,” a statement from Ramaphosa’s office read.

He further urged African leaders and the international community to “denounce and reject” the unconstitutional military-led change of government, and to help Mali restore order.

“France has become aware of the mutiny that has taken place today in Kati, Mali. It condemns in the strongest terms this serious event,” Le Drian’s official statement read. He also urged the soldiers to return to their barracks without delay.

The United Nations Security Council has scheduled an emergency meeting for Wednesday to discuss the growing tensions in Mali, AFP reported.

The meeting was organised following requests from France and Niger. It will allegedly be held behind close doors.

The European Union’s Foreign Policy Chief Josep Borrell took to Twitter to condemn the military coup that took place in Mali on Tuesday, calling it “unconstitutional”.

“This can in no way be a response to the deep socio-political crisis that has hit Mali for several months,” his tweet read.