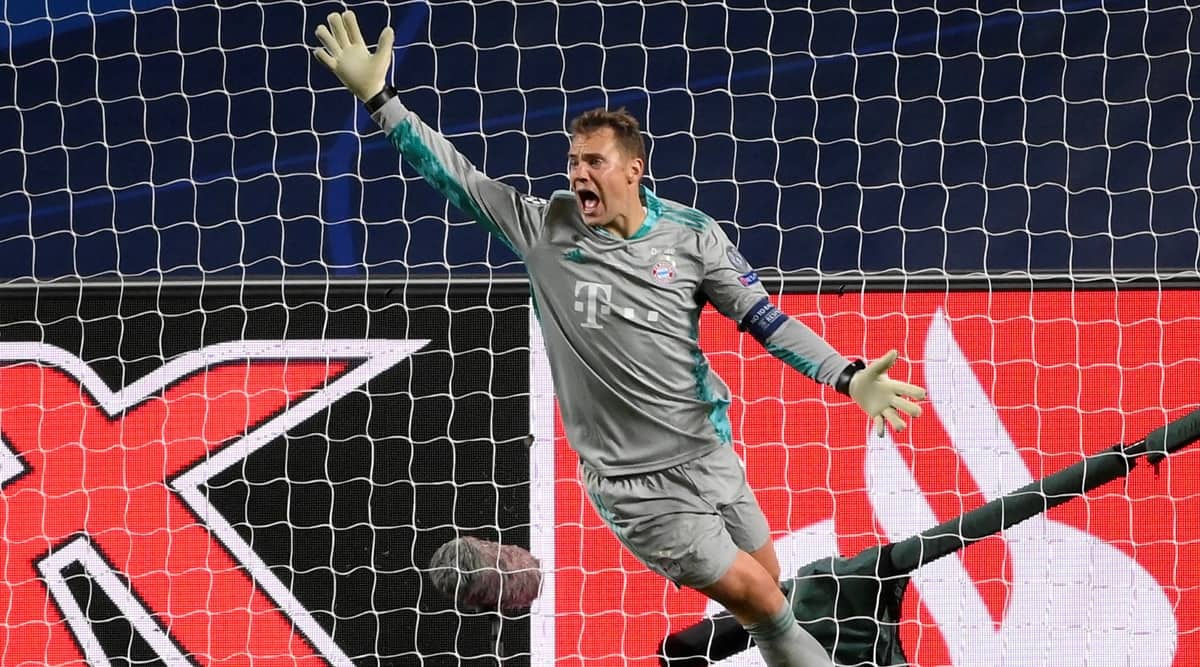 Manuel Neuer in action against PSG in the UEFA Champions League final on Sunday. (Source: Reuters)

Bayern Munich skipper Manuel Neuer is a highly evolved goalkeeping specimen known as the “possession keeper”, for he combines the role of a shot-stopper, sweeper and libero. Not only does he thwart strikes, but also circulates the ball and launches attacks. He’ll also stride out, make neat tackles and feed defenders with accurate passes, as part of the pressing game sweeping over Germany. The Bayern press actually begins with Neuer, who has the foot skills to deal with defensive problems before they emerge, freeing up field players to press opponents deep into their own half.

So multi-faceted is he that besides trusting him with free-kicks and penalties, his Germany manager Joachim Loew reckons he can play in the midfield. The versatility means his fundamental shot-stopping skills go slightly under-appreciated. But in Bayern’s triumph over PSG, his acrobatics, anticipation and aggression brought the spotlight back on his core skill as shot-stopper.

In the 70th minute of the match, Angel Di Maria slid a needle-eye pass through to Marquinhos. He ran onto the near post and blasted a shot between the post and Neuer. The German goalkeeper flung to his left, to the intended direction of the ball, only that the shot was miscued and hence trickled to the right of Neuer. But the latter, far from being flustered, stuck out his right leg to the opposite direction of his body, and scrambled the ball away with his shin. Similarly, he had prevented Neymar from scoring in the 18th minute from just 10 yards. The trickster that Neymar is, he looked to shoot towards Neuer’s right, but chose to place the ball to his left. But for the intervention of Neuer’s extended left-leg, it was goal-bound.

As he makes his landing on the ground, his body is spread-eagled symmetrically like a gymnast, his eyes fixed on the ball, hands aloft like a busy traffic policeman. It’s one of those frames that look better in a photograph than on television. It’s the ultimate expression of the 21st-century goalkeeper’s expanded role in the flow of play. It’s a patented Neuer move. He dives one way, but his leg moves in the opposite direction. He makes it look like a micro-second adjustment, upon realising that the ball is heading the other way, as if he has achieved yogic flexibility of his body, but in reality it’s a practised, nuanced act. The key to the move is his eyes, which are so fixed on the ball that he could gauge even its minutest deviance in the air. And his body is supple enough to make awkward contortions –it keeps an immaculate balance during the complicated movement. Sometimes, he does it deliberately, to fool the striker. He flings one way, the adversary shoots the other way. But some part of Neuer is already there to block the ball.

Talk of strikers sending goalkeepers and defenders the wrong way, here a goalkeeper was sending the striker the wrong way. It’s part of the reason some strikers freeze at the sight of Neuer. He might not be as physically imposing as some of the legendary goalkeepers, but his reputation is enough to psyche them out.

Difficult though it is to master the move, it empowers goalkeepers to cover more ground and equip them with a better reach. As such, the 6 feet 4 inches Neuer has extraordinary reach. Once a striker is aware of this skill, reluctance creeps, he’s confused and this fleeting deliberation is all it requires for the defenders to congest him. It’s especially effective against the ground-trimming snap-shot, thus encouraging attackers to launch more air-borne strikes at Neuer. But then the accuracy is compromised, and Neuer is terrific in dealing with airy strikes, unless they are guillotined from the boots of Cristiano Ronaldo, who always relies on power than placement against Neuer.