Way back in 2017 when Bhilar, a village in Maharashtra’s Satara district, was declared a ‘village of books’ (Pustakanch Gaav) by the State government, it sparked an idea in Kerala. The office bearers of Bapuji Smaraka Vayanasala, a library in Perumkulam, near Kollam, in Kerala were determined to replicate it, and they have finally achieved their goal.

On June 19, Perumkulam was declared a ‘village of books’, by writer MT Vasudevan Nair, making it, possibly, the second in India and Kerala’s first. Even before Bhilar became a ‘village of books’, Perumkulam had placed its first public bookcase as an experiment in 2017, says V. Vijesh, a school teacher and former secretary of the library. Bhilar has specially created spaces with books, to encourage reading. Perumkulam’s Bapuji library, formed in 1948, is housed in a three storey building; writer M Mukundan is the patron of the library that has close to 625 members.

As part of Perumkulam’s transformation into a ‘village of books’, the library recently placed 10 pusthaka koodu (sloped-roof, house-shaped glass bookcases) across 10 spots in the village, which has a population of around 4000 people. “Each has 30-50 books, mostly children’s literature which the kids can borrow,” says Vijesh. There are a few books for grown-ups and newspapers too. The idea is aimed, primarily, at children so that the habit of reading is encouraged and nurtured early.

For the love of books

The idea of the bookcase came from US-based Little Free Library – a book sharing movement through bookcases placed in public spaces, following its model of sharing books. The Perumkulam library is registered with the Little Free Library, “With the registration, our library shows up in their map of Little Libraries. That gave us the idea of placing the bookcase in a public space,” Vijesh adds. The design of the cases, though made locally, was inspired by some of those of the Little Free Library. The bookcase was placed in January 2017, the ‘village of books’ idea came later when in May that year after Bhilar was declared one.

There was scepticism when they installed the first bookcase. Office bearers of the library expected the books to either remain unused or the glass-walled bookcases to be shattered. 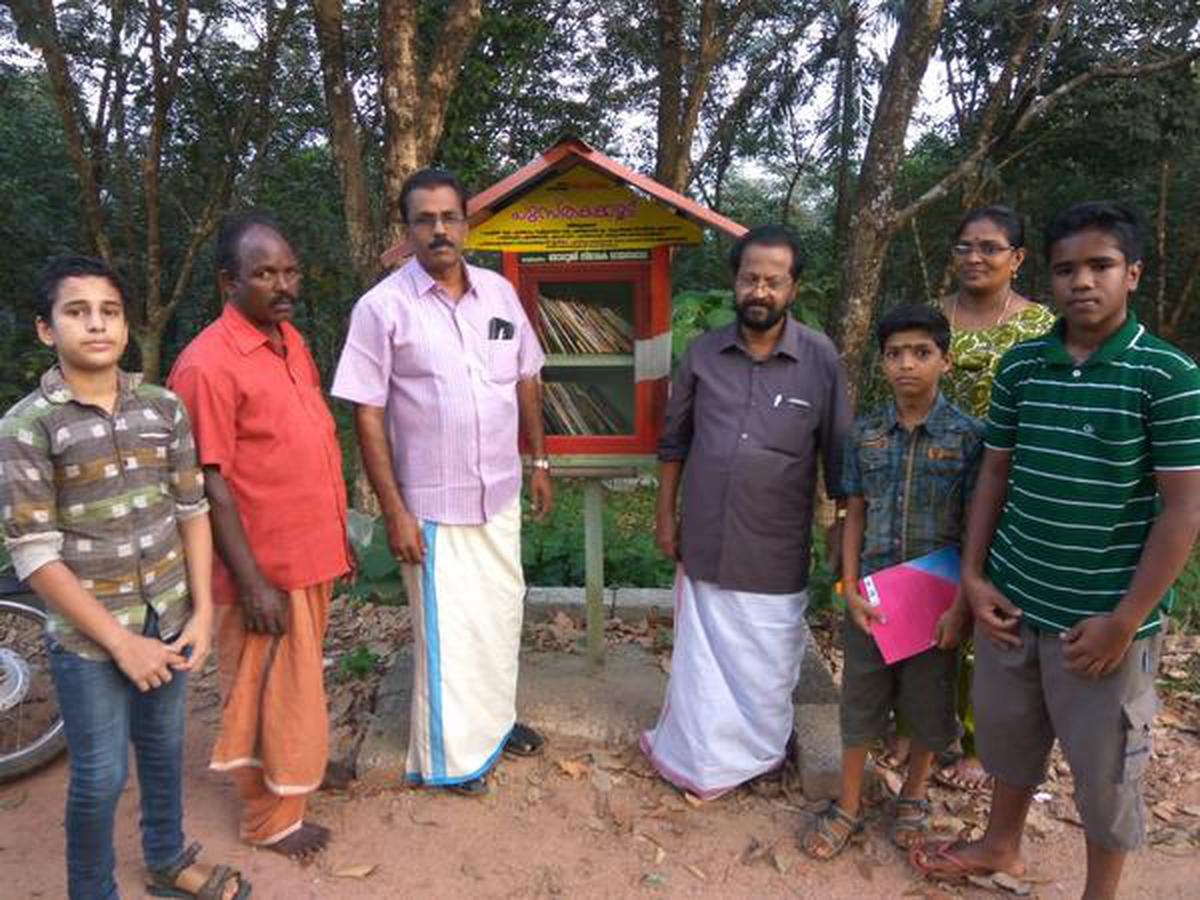 “We were pleasantly surprised that neither happened. It is intact and the books were being read. We placed a register there since we couldn’t monitor it. The principle is simple – you take a book and keep it back or replace it with another book. Going by entries in it, not only were the books are being read they were also replaced with others – obviously the response is good,” he adds. Encouraged by the response the Vayanasala team, led by Perumkulam Rajeev and K Gopalakrishnan (president and secretary respectively of the library), decided to ramp up the project.

In Bhilar, as part of a Maharashtra state government project, when it was inaugurated there were 25 book zones, created to encourage people – locals and tourists – to pick up a book to read right there. Around 75 artists painted the walls of community spaces – temples, houses, and schools – in keeping with literary themes and figures.

The bookcases also have been strategically placed – almost all are near bus stops which have attached waiting sheds with seats. “All have newspapers as well. We also encourage that books be taken home, read and placed back,” Vijesh says. The library is prepared for books going missing – it will replenish the box.

Santhwan Vijay, a student of Class VII, looks forward to reading books after schools reopen after the lockdown, “There are bookcases everywhere in our village now. I can take books from here – there is plenty for us, kids, and also grown-ups. I can read on my way to school and back, I can pick up books from one and put it in another and read one from there.”

The bookcases have been built with sponsorships by locals from the village. “It is imperative, especially now that children are forced to use smartphones and computers for their education, that they have access to and are encouraged to read books,” Vijesh adds.

Not convinced? Know why you should pay for news.

While theatres around the world are slowly inching towards reopening, even in India, the announcement of releases of Akshay Kumar’s