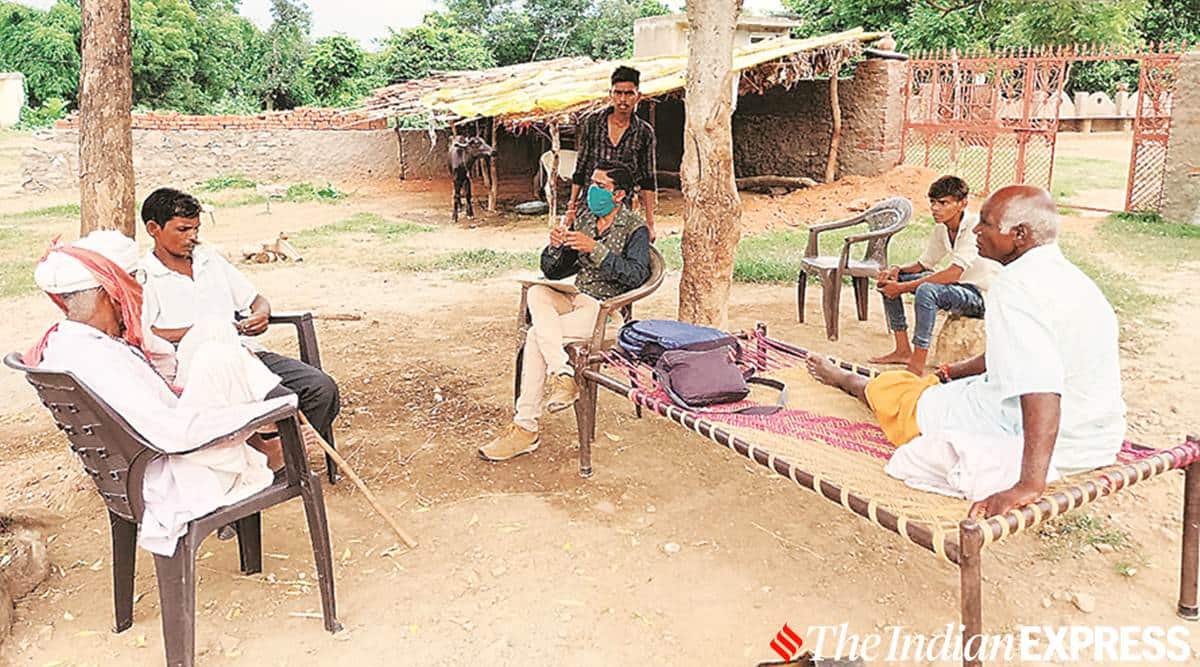 According to the state government, over 49,000 people have returned to Dungarpur since the the lockdown. (Express photo)

Bhimraj Gayari was in his teens when he first moved to Mumbai in the early 2000s and started working as a helper at tea stalls.

After over a decade, Gayari was running his own eatery and tea shop and had also hired help. “I owned a tea shop and eatery in Versova which fetched me a monthly revenue of Rs 40,000-50,000. My shop also had two staff members. After paying their salary and other expenses, I would have around Rs 25,000 left as profit each month,” said Gayari.

Now, the 32-year-old is now back in his native village of Arandia in Rajasthan’s Dungarpur district, working at times as a daily wage labourer, unsure of ever returning to Mumbai. The first of his family to set up a business outside the state, Gayari had to leave Mumbai and travel home in March a few days before the Covid-related nationwide lockdown came into place.

“A few days ago, the landlord of the building where my shop was situated called me to say that he is renting the room to someone else as I couldn’t pay the rent during the period of lockdown… I have no steady work and had to work as a daily wage labourer near my village, including on MNREGS work sites,” Gayari told The Sunday Express.

He is among many others from the state who had moved to bigger cities and set up small businesses over the course of several years — now staring at an uncertain future after having lost their livelihood.

A resident of Bamania village in Udaipur district, 38-year-old Kevaram Meghwal had to shutter his eatery in Surat even after attempting to restart it in June — when the government had first announced Unlock 1.0.

“I had to come back from Surat after the lockdown. I owned an eatery selling tea and snacks which I had started in 2012. I had to work for a decade to save money for it. But my entire business was lost in the lockdown. I went back to Surat in June to try and restart it, but the police didn’t let the eatery function. I had to sell the cart for Rs 2,000,” Meghwal said, adding that he also had to forego the rental spot where the cart used to operate.

Meghwal’s profits from the eatery before the lockdown were in the range of Rs 15,000-16,000 every month and he had also employed a helper. Since his return to Bamania, his only income has been Rs 4,000, which he earned after working under the MNREGS scheme.

According to data from Raj Kaushal, the portal of the Rajasthan Government Labour Employment Exchange, more than 13 lakh migrants have returned to the state after the lockdown and constitute about 25 per cent of the total labour force in the state — 52.5 lakh.

While 1,07,031 migrants have arrived in Udaipur since the start of the lockdown, over 49,000 have returned to Dungarpur, the portal data reveals.

“A large number of returning migrants in districts such as Udaipur and Dungarpur are first-generation entrepreneurs who moved to cities such as Mumbai, Ahmedabad and Surat where eventually they came to own businesses, improving their living standard. But after losing their businesses in the wake of the lockdown, they are now back to a situation akin to when they started off and didn’t have a source of steady income,” said Dharmraj Gurjar, Dungarpur coordinator for the Aajeevika Bureau, an NGO working with migrants.

Rajasthan Labour commissioner Prateek Jhajharia told The Sunday Express that even though the state’s labour department has not conducted any survey on the number of migrants returning from cities after the lockdown, according to information from district administrations, it could be assumed that some of these migrants are choosing to go back.

But a fresh start may not be within reach for some. Prakash Meena, who had to move back to Dungarpur from Ahmedabad with his family, says he is no position to return. “My three children, aged between 5 and 12 years, were enrolled in a private school in Ahmedabad where I owned a tea shop. I haven’t been able to go back since the lockdown. At the moment, I am unsure about going back because I am not in a position to restart the business. I am sitting at home, looking for small jobs here,” he said.