But, with the similarity of the symptoms of these diseases to COVID-19, people are becoming increasingly confused as to whether they have contracted a common cold and cough or COVID-19.

Since some prefer self-medication, assuming it to be a common viral illness, it is some cases leading to complications and resulting in late reporting of COVID-19. Sometimes, by then, doctors have very little time to manage patients. 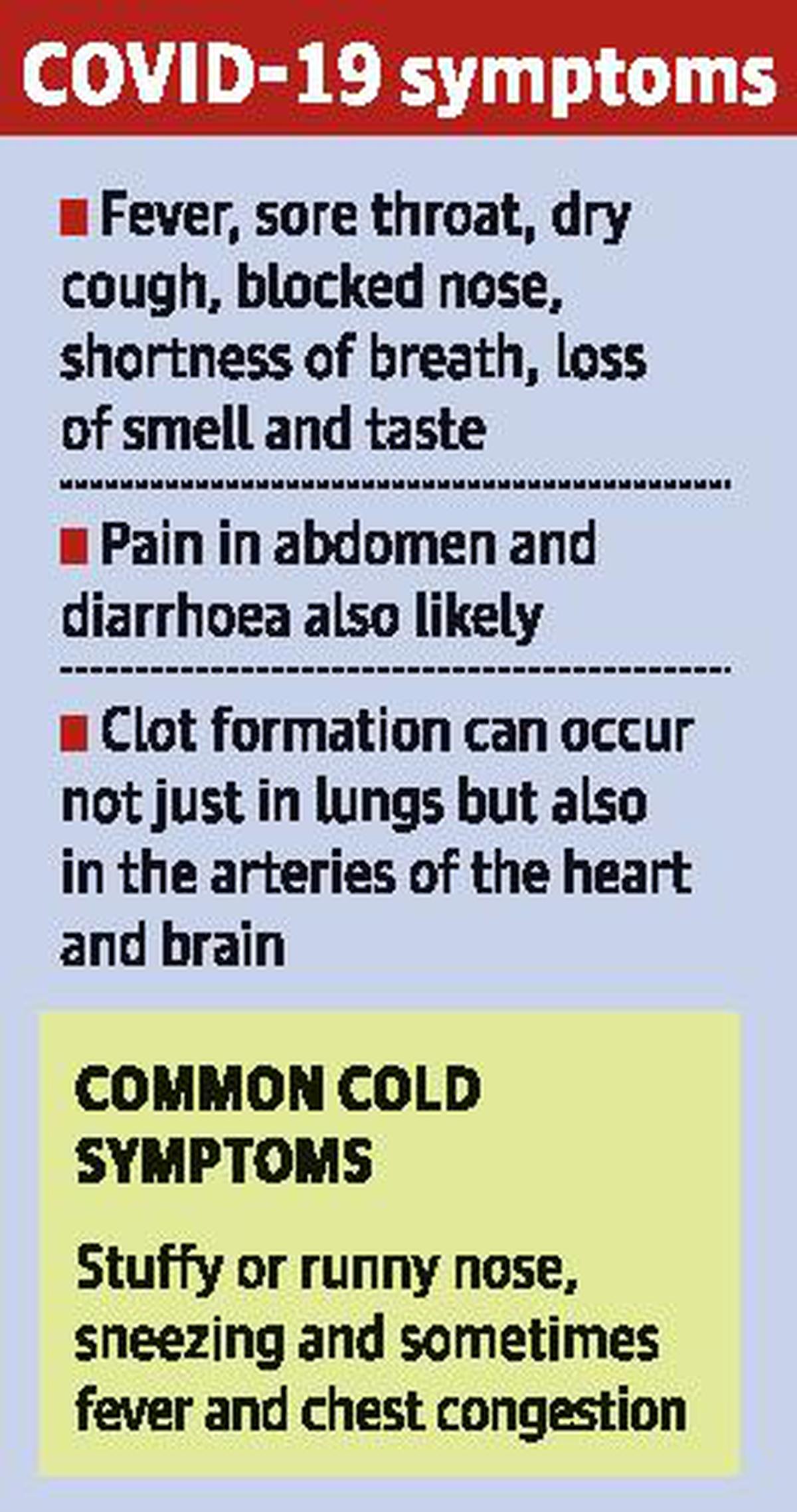 Doctors have said that while fever, sore throat, dry cough, blocked nose, shortness of breath and loss of smell and taste are common COVID-19 symptoms, some patients tend to develop severe gastrointestinal, cardiac and neurological issues such as dizziness, seizures and confusion.

“Pain in the abdomen and diarrhoea may seem to be gastrointestinal issues. But these are also emerging as COVID-19 symptoms,” said C.N. Manjunath, nodal officer for labs and testing in the State’s COVID-19 task force.

“While COVID-19 is predominantly a respiratory disease and it is common to see lung involvement, what we must keep in mind is that it is a thrombogenic disease and precipitates clot formation. In 10%-15% of patients, clot formation can occur in the arteries of the heart and brain,” he said, adding that heart attack in COVID-19 patients can also be natural or due to fear, anxiety and stress.

Sudarshan Ballal, chairman of Manipal Hospitals, who is also part of the State’s COVID-19 expert committee, said as the symptoms of many respiratory viruses are somewhat similar, many a times it is difficult to distinguish whether it is a common cold, flu, Influenza ‘A’ H1N1 or COVID-19 based on the symptoms alone.

“However, what we do know is COVID-19 symptoms are more predominantly fever, sore throat, body ache, gastrointestinal symptoms and sometimes loss of smell and shortness of breath. The symptoms of common cold are more of stuffy nose, runny nose, sneezing and sometimes fever and chest congestion. It is always better to consult a doctor and get tested when in doubt,” Dr. Ballal said.

“During the monsoon season, the most common diseases have four mediums of transmission – mosquitoes, water, air and contaminated food. People should watch out for mosquito-borne ailments such as dengue, chikungunya and malaria; water-borne diseases such as typhoid, cholera, jaundice apart from gastrointestinal infections and air-borne infections apart from common cold and flu,” he added.