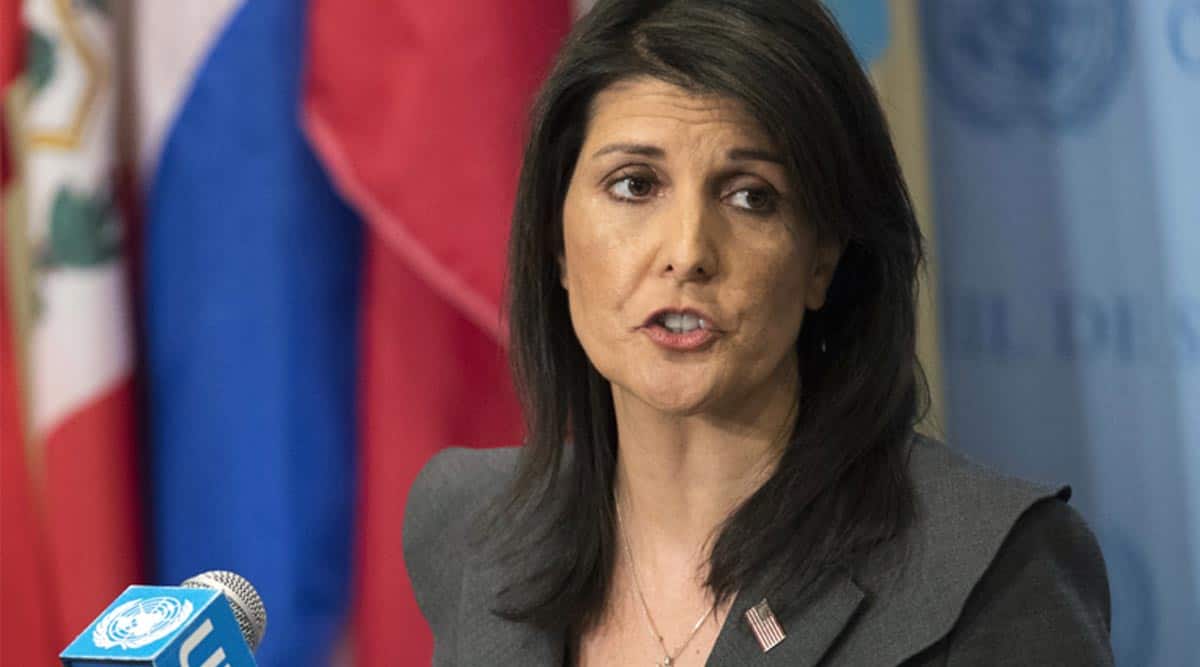 Earlier in the day, the South Asians for Biden challenged Nikki Haley over her remarks on the first night of the Republican National Convention that America is not a racist country. (AP File Photo)

Indian-American politics during a bitter electoral season took an ugly turn on Tuesday when the South Asians for Biden launched a smear social media campaign against Republican politician Nikki Haley over her remarks a day earlier that the US is not a racist country.

Following backlash from the community members and many others, the South Asians for Biden, which is affiliated to the Biden campaign, apologised and deleted its tweet later in the day.

“Upon further reflection, an earlier tweet drawing attention to the name of Ambassador Nikki Haley has been removed. South Asians for Biden regrets the tone of the message,” the group tweeted after deleting its previous tweet.

Earlier in the day, the South Asians for Biden challenged Haley over her remarks on the first night of the Republican National Convention that America is not a racist country.

“In much of the Democratic Party, it’s now fashionable to say that America is racist. That is a lie. America is not a racist country,” said Haley, the former US Ambassador to the United Nations. Her speech, in which he narrated her Indian-American background, has been widely praised.

However, the South Asians for Biden in a tweet, which has now been deleted, alleged that Haley had to change her name from Namrata to Nikki mainly because it is the other way round. “If America isn’t racist, why did Namarata Haley feel compelled to change her name to ‘Nikki’?” it said.

“Maybe just the Republican Party is?” the South Asians for Biden said.

The tweet attracted criticism from various quarters. “The Biden campaign made a racist and false accusation against Nikki Haley, and Journos have chosen to completely ignore it,” one of her Twitter followers said.

“There is nothing the Democrats hate more than a conservative women of color. Nikki Haley infuriates them because she refuses to toe the radical leftist ideological line… and Democrats can’t stand when people of color think for themselves,” tweeted author Liz Wheeler.

As many came out in support of the 48-year-old Indian-American politician, the South Asians for Biden was quick to apologise. “We will continue to focus on the very real issues facing South Asian voters this election,” it said after it expressed its regret and deleted its previous post.

In her speech on Monday, Haley had said, “I am the proud daughter of Indian immigrants. They came to America and settled in a small southern town. My father wore a turban. My mother wore a sari. I was a brown girl in a black and white world.”

In a tweet in 2018, Haley had explained that Nikki is her name on her birth certificate. “Nikki is my name on my birth certificate. I married a Haley. I was born Namrata Nikki Randhawa and married Michael Haley,” she said in a tweet on May 20, 2018. At that time she was the US Ambassador to the United Nations.

Nikki is a popular name in Punjabi. Nikki means “Little One” in Punjabi.

Born as Nimrata Randhawa in South Carolina, she is the daughter of Ajit Singh Randhawa and Raj Kaur Randhawa, who emigrated from Amritsar in Punjab.

The Republican National Convention will on Thursday formally re-nominate President Donald Trump as its candidate for the November 3 presidential election.