Every morning, the entire Dhaba village of Sehore district transforms into a classroom for an hour. Parents and children study together — sitting cross-legged in their courtyards or engaged in chores every morning, while listening attentively to English lessons and stories broadcast on a loudspeaker.

The COVID-19 pandemic has forced schools shut, hobbling the learning of students. But that of residents, including primary and middle school students from close to nearly 50 schools of the Nasrullaganj block, has been democratised — all one needs is to pay attention and listen. “Education is first about listening, broadcasting lessons publicly is bolstering the skill among everyone,” said 40-year-old Santosh Dhanware, Block Academic Coordinator. About 70% of the around 25,000 primary and middle school students in the block don’t have access to smartphones, in vogue as a medium for e-learning as schools remain shut. Instead, educational modules on radio from 11 a.m. to noon broadcast through loudspeakers is helping students stay home during the pandemic and continue learning, besides widening the net to cover even elders, said Mr. Dhanware.

“Teachers can’t visit schools every day now, so the role of guardians assumes greater significance,” he explained. And most parents in the block have never stepped inside a school, nor can they read. “Several students are first generation learners in schools, so education of parents along with them is important as well, so they could guide them.”

An elderly man in the village said through English lessons recently he had learnt the meaning of ‘thank you’ and ‘sit down’. “I once visited my manager, who said — ‘sit down’. I thought he was asking me to come later,” the man, requesting anonymity, said. A teacher with a microphone system at a school in Sehore district.
Credit: Special arrangement

The radio modules also include moral stories, which adults particularly enjoy, said Mr. Dhanware. “Folklore and stories have been part of the tribal culture here, and it’s easier to make sense of social issues through them for locals,” he added.

As the only middle school teacher in 2012-2014 for 156 students, Mr. Dhanware came up with the idea of using a microphone and a loudspeaker to touch each student. “During COVID-19, the learning gap is widening, so the community must come forward as part of the ‘Humara Ghar, Humara Vidyalaya’ programme,” he said.

In a bid to evolve a self-sufficient model and boost peer learning, senior students are teaching junior ones while self-help groups are also involved. “Almost every school in the block has former students now in higher education who are back home with colleges shut. They are been encouraged to teach school students now,” he said. 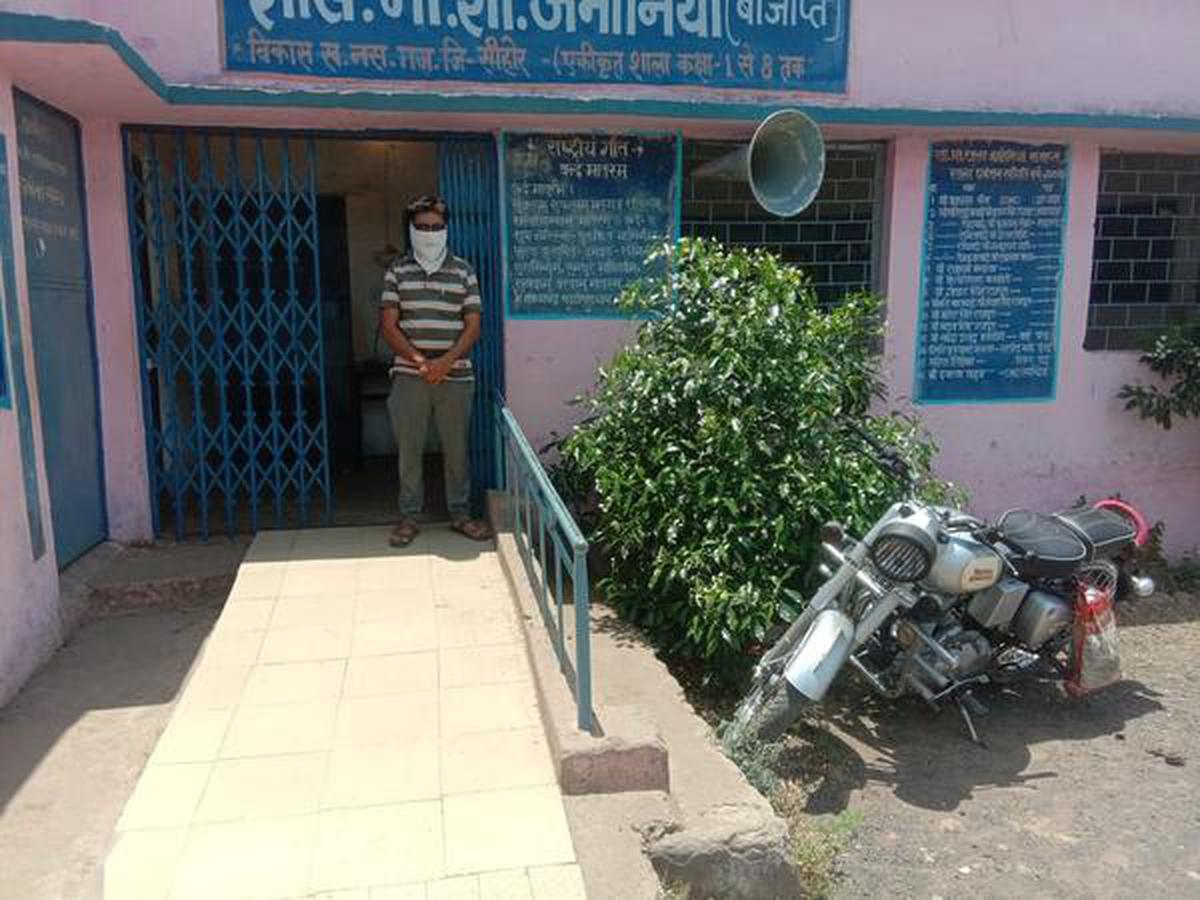 A school in Sehore district with a loudspeaker to broadcast lessons.
Credit: Special arrangement

In Narela village, said Dayaram Yadav, a primary school teacher, students had been roped in to even read out lessons on microphones for the entire village to listen and learn. “Teachers teach us in the school, but now we are getting to teach even our parents or anyone passing through the village,” said Shivam Rajput,13, Class VIII, often picked to read out.

“The model has been replicated in several areas of the State,” Lokesh Kumar Jatav, Commissioner, Rajya Shiksha Kendra, told The Hindu. “We issued instruction to this effect in June-July.”